Ever wonder what really went on? The founder of the first US team to compete talks about how and why the show got made, along with a snark filled commentary to a never shown in the US episode.

Be sure to RSVP using our MeetUp group.

About the Speaker:
Trained as a computer scientist, Jeff Del Papa has 25 years’ experience both building, and managing the building, of a range of software, from low level industrial process control, IC design tools, and network internals to compilers for advanced programming systems, machine learning, robotic research, and expert systems for financial and manufacturing analysis.

Jeff is a life-long Maker, and a recreational machinist, building a wide variety of often-unusual machines. Several recent projects involved large catapults, including one that threw an upright piano and others that have won their class in national competitions.

Other contraptions include human powered devices, like the Buscycle (a 15 passenger human powered “bus”), Trondholm (an adult-sized recumbent tandem tricycle that has been clocked at over 50 miles per hour.), and Blendy, a pedal powered food blender. He recently won the inaugural “Raising the Bar” building competition, and was Maker in Residence at Parts and Crafts, a Boston kids maker space.

He founded “The NERDS”, the first US team to appear on the engineering competition TV series Junkyard Wars (called Scrapheap Challenge outside the US). The team made it to the final round in 2000, and was invited back in 2006 for a special episode commemorating the British engineer I.K. Brunel. For the competition rounds, the team built a two-person submarine, converted a car to coal fired steam power, and built a fire-fighting boat (each build completed in a single day). For the commemorative episode, they turned a ready-mix cement truck into a giant paddleboat. 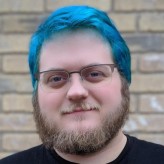