My day job is a data pipeline and machine learning engineer for rewardStyle, a small (but well-known in the industry) social media influencer marketing company. Previously I worked at the "makerspace" at Capital One Auto/Home Finance as a software developer & QA guy on a variety of projects around Capital One Auto Navigator and also in their innovation lab trying a number of experiments in blockchain, AI/ML, AR/VR, and IoT, including making formal intellectual property filings. My previous job was as a test automation developer & toolsmith for Hewlett-Packard on their OneView, Superdome 2, and Superdome X products for enterprise data centers, focusing on various aspects of firmware including manageability & system firmware (basically UEFI BIOS) testing.

My spare time consists of working/playing on pinball machines with the VECTOR committee, selling LEDgoes while exploring other microcontroller projects, planning Meetups for various groups I'm responsible for, stock & options trading, and dinking around on musical instruments (drum set & marimba, occasionally piano, plus some other odd pieces). Someday I will get back into mobile development, and resume other projects in the pipeline. My HAM Radio call sign is KF5NQM; I was licensed as a General on 11/30/2011 at DMS.

I've been a member of DMS officially since Sep. 2011, shortly after they moved to the Ladybird Ln location.

11/17/2019 - The DMS Board of Directors named me the Chairman of the DMS VECTOR Committee.

10/1/2018 - I became a Google Developer Expert in Machine Learning. There are only 60 other ML GDEs in the entire world to date, plus a couple hundred other GDEs in other categories.

4/27/2018 - Ended the Civic Hacking Committee, moving to roll it into a SIG inside VCC/Software.

10/7/2017 - I debuted a Family Feud podium styled after the Ray Combs version, made at Dallas Makerspace, at Retropalooza V in Arlington. Not only was it the 5th Retropalooza, it was also my 5th anniversary.

11/2/2016 - I wrote the LED lighting effects for an art project at Tech Week DFW's "Surround Sound" event at the Bomb Factory in Deep Ellum. Nick Sainz, Darcy Neal, and Stacy contributed to various other aspects of the project.

10/27/2016 - I hacked the ROM of the Bally/Midway arcade game "Tapper", replacing Budweiser logos with Community Beer, for a recruiting event at work.

10/1/2016 - Stacy & I did a virtually impromptu talk on the creation of the Giant NES Controller at Retropalooza IV in Arlington.

9/10/2016 - Stacy & I exhibited our Yukon pinball machine at the IFPA "Tournament of the EMs". I took 2nd place overall in the tournament!

7/8/2016 - My Giant NES Controller made at the Dallas Makerspace took the front page of Instructables!

3/15/2016 - I returned from a long hiatus from musical performance by becoming the drummer for the Capital One Garage Band.

8/4/2015 - Kickstarter fulfillment for LEDgoes/BriteBlox is finally complete!!! Now that our backers are happy, you can buy them for [nearly] immediate delivery at Grand St.

1/10/2015 - Stacy & I bought Gold Wings, a pinball game made by Gottlieb Premier in 1986. It is our first pinball game, and we are restoring it at DMS with help from the Vector Committee.

2/16/2014 - The DMS Board of Directors named me the Chairman of the DMS Civic Hacking Committee.

10/4/2013 - I organized a group of DMS volunteers to present at the Perot Museum's Social Science night devoted to sound. We presented DecorreLab, non-Newtonian fluids, and an electronic sound effects generator made from a "Makey Makey" with various fruits and other items capable of being used as resistive touch sensors.

LEDgoes is a modular LED matrix capable of displaying text or animations using simple control software, and controllable over several standard interfaces including USB and Bluetooth. I teamed up with the folks at Makertronic to handle order fulfillment & shipping, and the whole thing is being assembled & programmed here in Dallas. 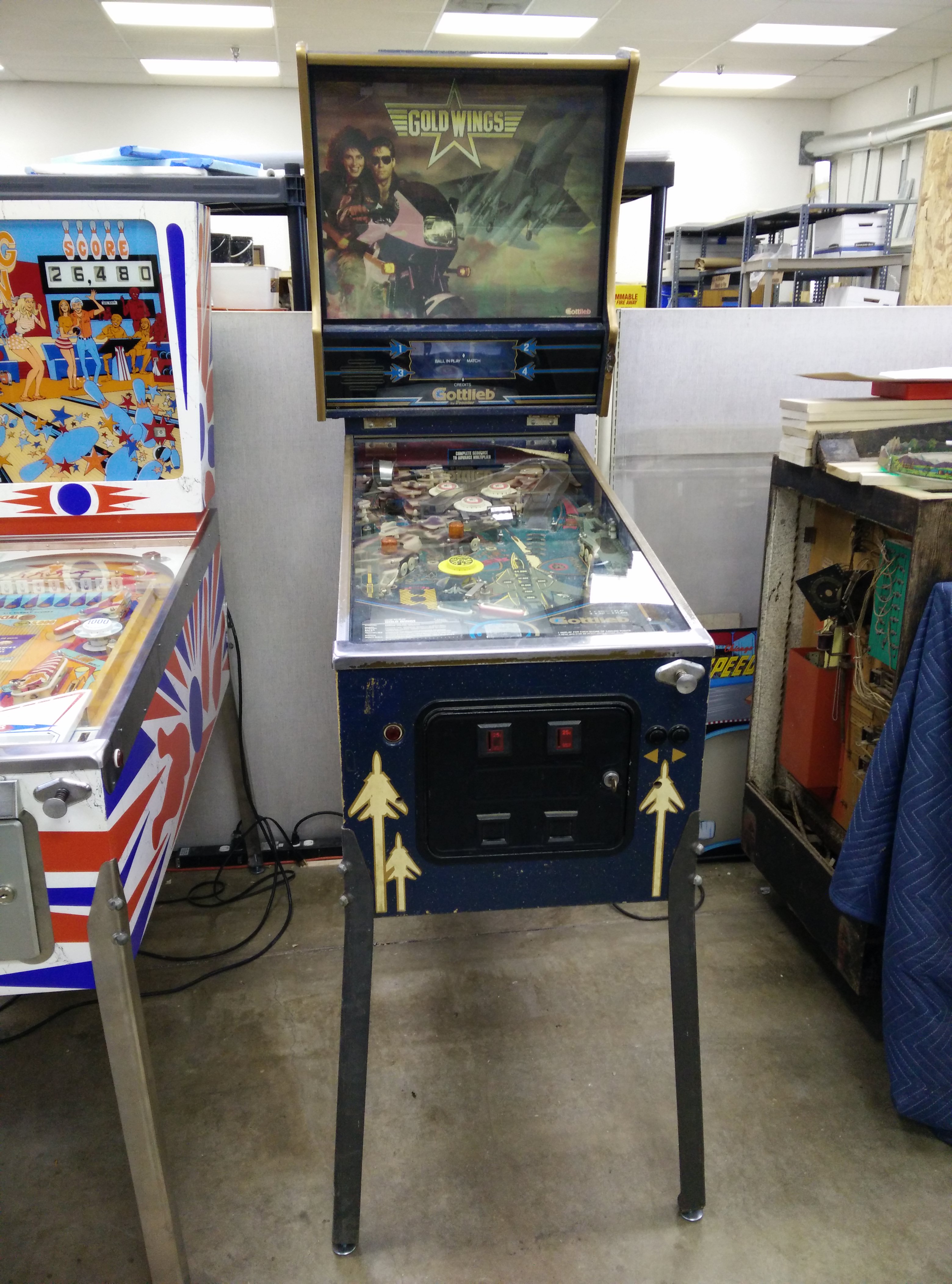 Gold Wings, complete with tacky backglass artwork (which has since been replaced)

During its time, it was played several hundred times with several notable high scores which would have accounted for 5 of the top 8 top scores for Gold Wings on pinside.com (as of summer 2015) if members would actually choose to log them there. The best high score observed at DMS on this machine was 90,996,890 by JAY on or around April 30, 2015. The all-time world high score officially known for Gold Wings is over 160,000,000 by a fellow named Jim Killy probably in the 1980s or early '90s.

As such, I'm into open civic data hacking initiatives, and am happy to lend my scripting expertise (Perl, Python, and JavaScript) to data scraping & aggregating for the sake of making resources, tools, & activities more obvious to all Netizens.

http://goshtastic.blogspot.com - My technical blog
http://www.stev-o.us - Game shows & a smidgeon of Arduino
http://www.one-dollar.us - Random Web & mobile dev projects
http://www.owtsee.com - Open Data city guide for 3 major cities & growing
http://www.dfwdines.com - Map & guide for DFW Restaurant Week 2013, 8/12-9/2/13 (thanks to Mike Eber for letting me use the domain)
http://www.openbrite.com - The website for my side venture http://www.t3amaw3s0m3.com - Non-business things Stacy & I do together