This project has been completed.
If you would like to expand on this project, we suggest creating a new project page. 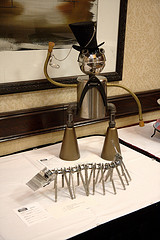 Found art has evolved since Marcel Duchamp turned a urinal into Fountain in 1917. The popular modern genre of found art known as junk art or trash art involves modifying and combining multiple found objects into something more recognizable as art by the average viewer. I became interested in making metal sculptures using this technique after seeing similar work done by others artists such as Gordon Bennett and Clayton Bailey. There's nothing really new about what I've done here, I just wanted to try my hand at something that seemed like a cool idea and see if I could do it myself. Like many projects, it's not as hard as you'd think, so if this looks like something you'd want to do, you should give it a try!

It might seem as though finding all the metal parts to do something like this would be a problem but it's really pretty easy. You can find a wide range of interesting metal at estate sales, garage sales, and thrift stores. If you really want to be purist, you can find a pretty interesting assortment of parts along major roads, near abandoned industrial areas, and other unexpected locations. Most of the parts I used for these two robots were bound for the trash one way or another, so this is good way to turn trash into something of value. Well, in theory anyway; I haven't had anyone offer me huge amounts of money to buy my creations but I like them.

My art robots have been exhibited at several events so far:

Calrad and Max are presently on display at Dallas Makerspace 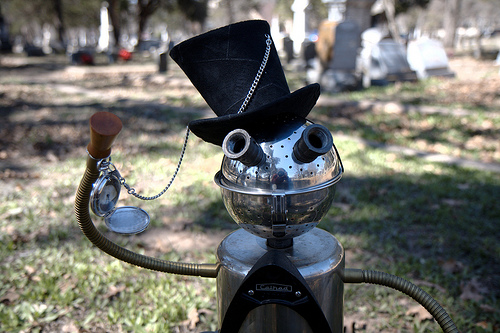 For my first modest attempt at creating a robot from found objects, I started by collecting lots of metal parts of all shapes and sizes. Over time a few parts seemed to naturally stand out to me as robot parts. One find in particular, a dual, articulated goose-neck lamp with metal shades, finally triggered a design and everything seemed to fall into place all at once.

The lamp's goose-necks became the robot's arms. The wooden rotary switches became hands. The metal shades became feet. I added some black iron pipe for legs. A stainless steel canister was turned into a body and a spherical strainer similar to a giant tea ball became the head. One difficulty was finding a way to connect the iron legs to the stainless steel body. Arc welding proved virtually impossible between the two metals. Drilling even tiny holes through the stainless steel proved quite difficult even with Mike Dodson's big drill press. We broke a few bits trying to drill leg holes. Finally, I used a gas torch to cut leg holes in the stainless steel. I was then able to wedge the threaded portion of the iron pipes into the ragged holes. I made the connection more permanent with a large quantity of JB Weld epoxy.

All humanoid robots need an ornate chest plate and a cast iron microphone stand from the 1960s turned out to be a perfect fit on this robot. The iron had the words "Calrad JAPAN" cast into it, giving the robot its name.

Calrad was exhibited at the 2008 Austin Maker Faire. Someone placed a disused straw hat on Calrad and it actually looked pretty good aside from being way too big for the little robot's head. So I began thinking the robot needed a properly sized hat. Also at the Maker Faire was expert milliner Amberry Jam, who I learned wanted to design a hat for a robot. She provided three excellent hat design options and we finally settled on an asymmetric design with an attached pocket watch, giving the robot a sort of eccentric, vintage look. 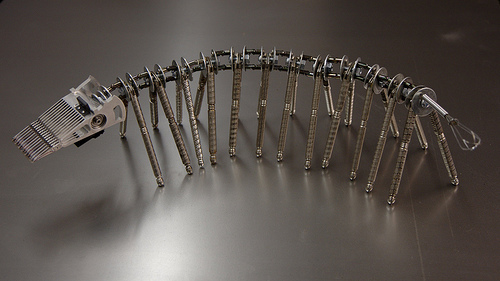 My second art robot took a much longer time to become fully formed. One of the places I find scrap metal parts is at estate sales. I noticed that nearly every estate sale you go to has a single nut cracker in the kitchen and that almost every estate sale nutcracker is identical. Most are even the same brand. I was sure there must be something I could make out of these so I began collecting them. One or two nutcrackers every weekend accumulated in my junk box. Playing with them I began visualizing something like a centipede with many pairs of legs.

It took months for Max to evolve from a vague idea into something real. I continued to collect nutcracker as I worked, with the idea that I'd stop at however many legs I'd accumulated once the other components fell into place. The first problem was finding a way to connect the nutcrackers to each other. I needed something like a backbone or spine. A goose-neck like I used in Calrad wouldn't work because there was no easy way to attach the nutcrackers to it. It seemed the only answer was to use individual U-joints between each nutcracker. Finding that many identical U-joints proved impossible, buying them was too expensive (and seemed to violate the idea of using found objects, anyway). Mike Dodson came to the rescue by donating a pile of metal circuit board hinges to my efforts. By combining hinges with large metal washers I found at the DPRG warehouse to create my own U-joints. So I began making lots of U-joints and assembling the legs.

Around this time Ed Paradis brought a very old Maxtor 5 1/4" full-height hard drive to an RBNO. He disassembled it to get the platters for a project of his own, leaving the large triangular head assembly. I knew the instant I saw it that I was looking at my centipede robot's head. I stopped adding legs at 12 pairs, or 24 legs and put on the head along with a tail. The final robot is an icosikaitetrapod (or duo-dodecapod if you prefer). I took the robot's name, Max, from the hard drive brand name.

<flickr>9019664411|right|frame|Decapitated Robot - <a href="http://www.flickr.com/photos/steevithak/sets/72157634073987149/">See More photos of ArtCon Mounted pieces here</a></flickr> This piece was made for the 2013 Art Conspiracy Seed auction, called Mounted. The theme was faux taxidermy. ArtCon holds this small charity auction each year to fund their much bigger fall art auction. All the money from the big auction goes to support a local Dallas art-related charity. I've been lucky enough to participate in ArtCon events for several years.

The obvious choice for me when asked to mount a head on a board, was to use a robot head. I imagined a whole back story in which a marooned spaceship crew is faced with a homicidal robot. They end up decapitating it and mounting its head on an airlock panel from their crashed ship. Unlike other pieces I've done this one had to be done quickly and on a tight budget. All the parts were existing junk I had lying around from previous projects. The front of the head is the face plate from a vintage Electrolux vacuum cleaner. The "robot antlers" are bicycle handlebars. The spinal cord is made from an assortment of plumbing parts, frayed ribbon cables, air hoses. The red/white airlock hazard stripes are a roll of reflective tape I picked up Harbor Freight. All things consider it came our reasonably well and pulled in a little under $100 at the auction.