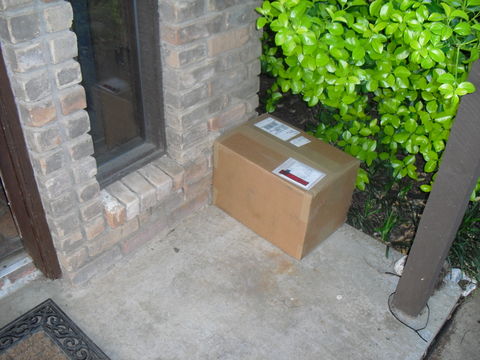 I forked over the $950.00, plus $50.55 shipping and handling on January 31st. It was for the CupCake CNC Deluxe Kit. I've been restless over the last few weeks, and it didn't help my anxious state of mind when everyone kept asking when this thing was coming in. I'd check the Makerbot website every day for some type of update, but no luck. They told me that it would be shipped at the end of March. Keeping true to their word, the order was shipped on March 31st, but not after I briefly gave up my daily check of the order status last week. When I got home from work today, I was startled to discover that it waiting for me on my porch.


I want to properly document this process, so I've resisted the impulse to rip apart the packaging and start the construction. In particular, I'd like to record a time-lapsed video to show the entire process from beginning to end. Unfortunately, between my next graduate session starting today, some time sensitive planting that I need to do out in the garden, and a worm bin that needs to be built within the next few days, I'll have some immediate scheduling limitations. I would prefer a solid chuck of uninterrupted time; at least three solid days.


I'll shuffle around my schedule, and follow up as soon as I can. In the mean time, I'll try to figure out how to set up an old webcam to record time-lapsed video.

Okay, so the time-lapsed video, regular updates, and all that other crap that I talked about in April never actually happened. So, here's the latest:


After a couple of months, I decided to put the Makerbot kit to work as a solicitation, marketing, team-building, and general fund-raising tool. Over the course of several weeks in May and June, the Makerbot began to take shape as DMS members labored piece it together. It printed it's first completed Rubik's cube in June (9 hour print time), and I eventually broke it while experimenting with PLA plastic. After replacing a broken drive gear, something else broke on it while continuing to experiment with PLA. This time, it was the Teflon Thermal Barrier and the Acrylic Insulator Retainer. Apparently, PLA plastic is harder than ABS, and a bit more tricky to heat and push out. Despite all my research, I learned the hard way. If you have an old, unmodified Makerbot, stick to ABS. The default kit isn't strong enough to handle anything else.


I recently discovered that the MK4 Plastruder was riddled with all sorts of other problems anyway, including shorts and overheating of the Nichrome Wire used supply heat to the print head. It also had frequent problems with the Acrylic Idler Wheel. So, I switched to the MK5 Plastruder, which should solve all my problems for a couple hundred dollars more. Worth it? Well, the thing looks pretty solid to me. It should be able to handle PLA without much trouble, which is a good thing, because I have about 25-30 pounds of the stuff to use up.

The Makerbot has been in use for many months now. I just put in an order for the MK6 upgrade and also a new nozzle. There is now a page for just this Makerbot and its operational details.

Installed the MK6 upgrade and the new nozzle. Also rebuilt the heating assembly and the mount of the thermistor (thanks to Ben.) Used thermal compound sourced from Fry's. It isn't finished but it is functioning well enough for tuning.

According to the update noted above by peter242 on February 24, 2011, the original Makerbot CupCake CNC 3D Printer at Dallas Makerspace was upgraded to a Makerbot 797. Please check out the wiki page for the Makerbot 797 at this link: Makerbot 797