Parts being designed in Sketchup 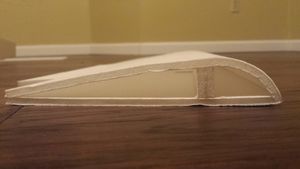 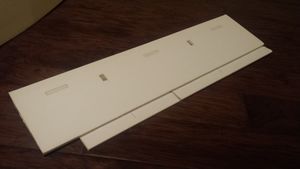 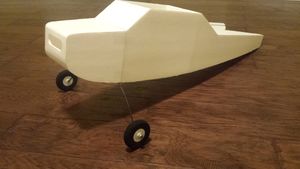 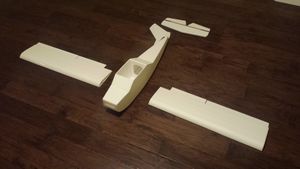 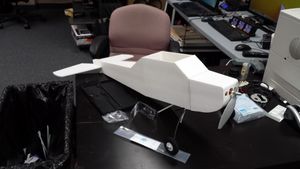 The DMS Trainer Plane project aims to create a simple, cheap, easy to fly trainer plane for new pilots. It will be constructed mostly out of Dollar Tree foam board, cut out on the Lasersaur Laser Cutter, and use some 3D printed parts. The idea is to utilize the tools we have at DMS in order to ease construction.

Ideally, we could hold regular classes where we build these, and then go fly at a nearby location.

The wing is the easiest part of the plane to design, so I started with that. It is simply made by folding two halves over a spar, with the top sheet forming an airfoil shape. Lots of score lines were used on the top piece, so that it bends evenly and smoothly. The wing is a constant chord design, with a flat bottom and thick airfoil. This should provide good low-speed and high-lift characteristics. I went ahead and added flaps to the design, but they are optional. If flaps aren't needed/wanted on a build, they can simply be hot-glued in position, and have the servo holes taped over.

The fuselage is the most difficult piece to design, since it has many more pieces than the wing or tail planes. It also needs to mount the radio gear, battery, motor, and landing gear. One challenge is finding a strong way to mount the landing gear that won't simply break the foam board on a hard landing. Another challenge is the motor mount, which also needs to be glued to the foamboard in away that it won't easily come loose. The fuselage is being design with a removable cowl, making it easy to replace after a crash.