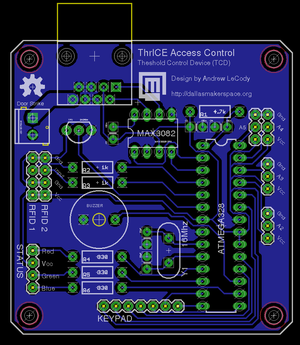 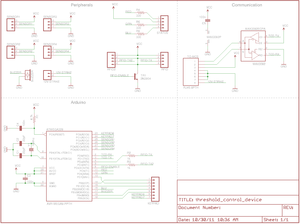 The TCD will consist of an RFID reader and keypad, connected to an atmega328 that sends the output from the two devices to our Master Control Arduino (MCS). The MCS will then determine what course of action should be taken. The TCD will also accept commands from the MCS to activate the LEDs and/or buzzer. For security the TCD handles no authentication logic. Pins 0 an 1 will be used for the serial connection to the MCS, while pins 2 and 3 will be used for software serial connections to the RFID readers.

Interconnect Between TCD and MCS

The MCS will handle all business logic for this system. When the MCS receives authentication data (RFID/PIN) from a TCD it will verify the information against an access control list, stored on an SD card. The MCS will communicate and accept commands over TCP/IP on our internal security network. Eventually encryption/authentication will be added to prevent unauthorized changes in the event our security network is compromised.

Example circuit of an analog sensor that can detect tampering/cutting.

In order to make our sensor more robust, we used a particular circuit layout for the sensors (when possible). The primary example is the door sensor, which can not only detect when the door is open or closed, but due to the addition of two resistors, can actually detect if the circuit as been cut or shorted.

The sensor itself is a simple reed switch in one half and a magnet in the other. When the door is closed, the magnet is close enough to the switch to cause it to close, completing the circuit. When the door is opened, the magnet is moved away from the switch causing it to open. In this basic configuration we can only detect an open or closed state. If someone were to cut the wire it would appear that the door was always open, and if they shorted the wire it would appear to be closed.

To overcome this limitation we can place a resistor in parallel with the sensor and another in series. The basic layout of our circuit involves a 4.7kOhm pull-up resistor connected to 5 volts, a 1kOhm resistor to protect our Arduino and then our two 4.7kOhm resistors near the sensor.

Now our circuit can have four possible states: